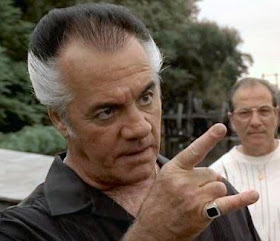 Dear Pete,
I learned from the Sopranos that it’s always paramount to establish respect before saying “with all due disrespect”. You, AO Scott, Emily Nussbaum, Jerry Saltz, Jon Caramanica (when he’s not Stan-ing for Drake or Sound Cloud rap lol), and Dwight Garner, are the only critics I read… RIP Michiko. If you can get Sam to stop writing recipes, I’d love to see him live podcast the Democratic debates.

But with all due respect… Peter Luger’s is the greatest steakhouse in the world bar none. When I stopped eating beef, there were three things I made sure to eat: Oxtail at Islands in Crown Heights, Taiwanese beef noodle soup at home, and Peter Luger’s steak. My last visit was the first week of August and it was just as good as it was the first time I went in 2004.

So I re-read this review three times and I’m convinced of three things:

If this is an attack on the beef industry, fine, but an attack on the institution, the salad, and the style of service is insane. I love an iconoclast, which is why I love the reviews you do three times a year that are an indictment of the direction food culture is going as much as it is an indictment of a restaurant, but this is a stray shot. This is like leaving a yelp review in 2019 about the service at Supreme in 2005. THAT IS THE FUCKING BRAND.

Why are you feigning ignorance about NY service standards? It’s “howyadoin,” “cash only,” “no returns, next.” Friends/family skip the line and if you don’t like it get the fuck out. Find your family and if you want better service or return policies, buy things on Far Fetch, increase carbon footprints, and watch the world burn in Palm Angels tracksuits by 2030 or whenever they say we are all going to die of contemporary men’s fashion now.

If anything we need MORE Peter Luger’s, more 2005 Supreme, more Great NY Noodletown. That’s what’s dying in New York! Every thing that has a singular confident identity anchored in local community and beliefs is being displaced by overly calculated/curated experiences that feel like algorithms trying to draw the greatest number of followers. Downtown is now this monolithic thing that looks the same from NY to Mexico City to Istanbul to London to Paris to Shanghai to wherever because every one thinks there is a way with enough numbers and research to appeal to every one like an iPhone.

The reason an iPhone or an iPad or an iMac works is because you only need one every 3 years. You aren’t eating three iPhones a day or wearing 7 pairs of iUnderwears a week. You make a choice once every three years: is it more important to save money or not be laughed at for sending green texts? Not every thing is that simple or sterile. At least not yet…

My Dad used to say, “People eat with their eyes. They look at a plate and decide whether it tastes good or not.” Now a days with sea levels rising, the water’s edge for judgment has reached the front door. People are eating font type. They’ve already decided by looking at the font type and Pantone colors of your restaurant whether it’s good or not. You put two colors of chili in a line on fish and it’s a fucking hit. Shouts to Contramar and shouts to the people in Hunan who have been putting two colors of fermented chili on fish heads for a thousand years, but every one else can die under the sea. IT’S BEEN DONE. WHY DOES YOUR FISH LOOK LIKE CHA CHA MATCHA?

Restaurants are all about the scene, the crowd, the design, the “chef”, while Peter Luger’s is about community. Yes, it’s fucking expensive. Yes, they push around new people. But just like Rao’s, just like Supreme, just like the old Union on Spring Street, just like Noodletown, if you are local, if you go a lot, people remember your name, they’ll save you a t shirt, they’ll save you a table, they’ll save you some suckling pig, and they’ll throw a little extra steak in your doggy bag. And this happened to me at these spots when I was broke selling t-shirts on a train. I still remember the people that held me down, made me feel part of the family, and stiff armed the posers and tourists and toys. That’s why we rep Peter Luger’s so fucking hard. It’s not just a place for old guys and rich people with the Peter Luger card; it’s aspirational.

Go watch the Ralph documentary and listen to why every one aspired to the life style. Peter Luger’s is the Ralph Lauren of steakhouses. This is the shit we aspired to. When my boy Quddus came into town with Sean Paul, we wore our Lo, we took him to Luger’s and we felt like we made it. Luger’s has been making people feel this way for 100 years and its why people still aspire to go. 5 years ago, I took two bags of steak to the club with Brian Procell and we held it up like the Larry O’Brien Trophy cause every one else could cop bottles but we had Peter Luger’s. We wouldn’t do that with any other food item besides maybe the Hennessy Wings from Dallas BBQs.

And this isn’t copping out on the food. The first time I went to Luger’s and got the check, I definitely did a double take. I considered whether the food was worth it, I wondered if I should have bypassed the German Hash since I’d be paying interest on it for the next three months of Chase Sapphire bills, but when I woke up for three days straight thinking about beef fat and potatoes, I knew I did the right thing.

There are very few restaurants you don’t need a menu at, but go to Luger’s and see how many people need menus. The ones with menus will complain, they’ll leave yelp reviews, and they’ll order Sole (which I agree is good and what I will be going back for now that I don’t eat beef). The ones without menus say a few words: steak for four, tomato onion salad, bacon for four, German hash, and creamed spinach. They don’t dip the steak in the sauce, they know why one side is seared hard, and the other is butter soft. They’ll take their partners, their parents, their best friends, and their grand kids. They’ll die dreaming of beef fat and potatoes as the world burns or sinks under water. And guess what, so will the people you see with menus today…